You may have heard about the benefits of terpenes and their role in the entourage effect. Beta-caryophyllene (more commonly referred to as B-caryophyllene) is a spicy, peppery terpene found both in cannabis and other plant sources. But what are the effects of B-caryophyllene and why did Dr. Russo include it in Daygold’s Calm Mind, Easy Relief and Restful Night formulas?

Based on decades of research, Dr. Russo chose specific botanical terpenes to address many common discomforts people are experiencing in their minds and bodies. Through a series of blog posts, we highlight a few of the many terpenes used in each Daygold blend including where they are found in nature and their benefits. Read all the articles in our Terpene Effects series, explaining the reason why our CBG oil tinctures are so power-packed with beneficial compounds. 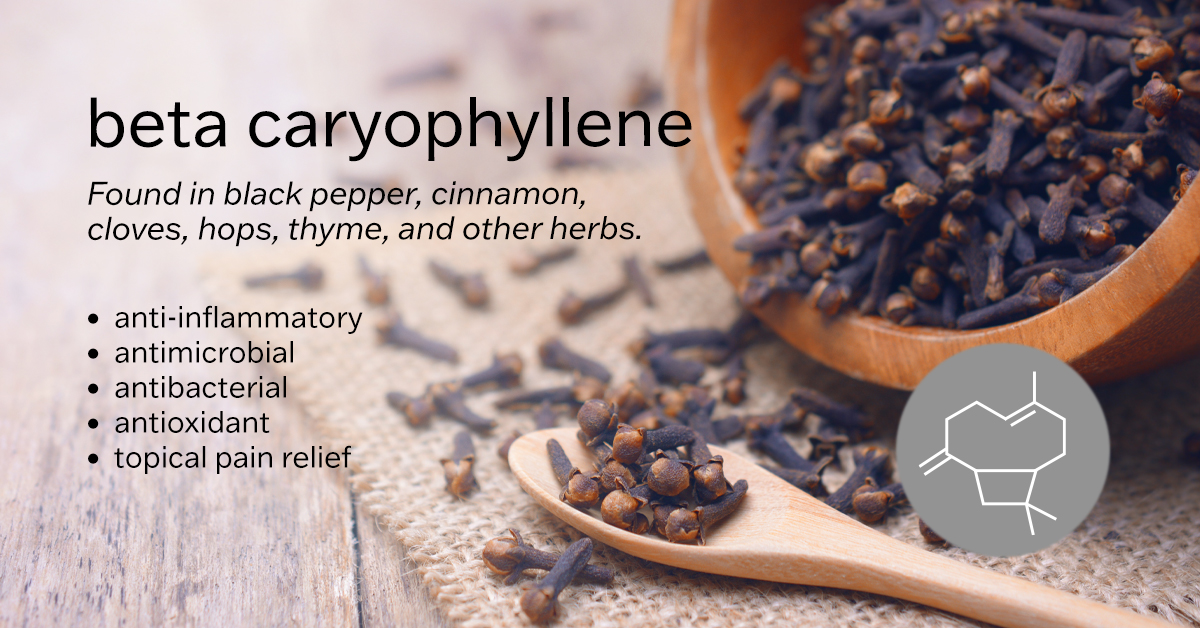 B-caryophyllene is a plant compound with a pungent peppery characteristic. It is slightly sweet, with a cinnamon-like aroma. It can be sourced from black pepper, black caraway seed, cloves, hops, basil and oregano.

The molecular structure of B-caryophyllene is significantly different from the other cannabis terpenes. As we have discussed in earlier articles, cannabinoids bind to CB1 or CB2 receptors in the endocannabinoid system. CB1 receptors are mainly found in the brain, while CB2 receptors are located mainly in peripheral organs.

Beta-caryophyllene attaches to CB2 receptors, effectively blocking the psychoactive effects of cannabis while still allowing for the delivery of other benefits, such as providing a calm mind and more easeful body. (If you haven’t yet watched our interview with Dr. Ethan Russo, be sure to watch it to learn more about terpenes and cannabinoids.)

What does B-caryophyllene do?

Additionally, studies show that beta-caryophyllene has promising potential as an:

Cannabinoids and terpenes blend in the human body to modify one another’s effects. In essence, they create an overall different or greater efficacy based on the same molecules present and the ratios in which they appear.

Beta-caryophyllene has been used as a flavoring agent in food since the 1930s. As an essential oil, this terpene is used to enhance the scent or flavor of food, beverages, perfumes, cosmetics, incense and more.

Our b-caryophyllene is extracted using a steam distillation process to protect and preserve the beneficial quality. The b-caryophyllene we use is also certified food grade, non-GMO, organic and natural for the ultimate quality, taste, and purity.

Our Calm Mind, Easy Relief, and Restful Night tinctures feature b-caryophyllene for its potential to boost your wellbeing, naturally.

Most of the information in these articles comes from Dr Ethan Russo’s 2011 paper published in the British Journal of Pharmacology and subsequently featured in the US National Library of Medicine, National Institutes of Health. You can read the entire report, here.

† These statements have not been evaluated by the Food and Drug Administration. This product is not intended to diagnose, treat, cure or prevent any disease.