You may have heard about the benefits of terpenes and their role in the entourage effect. Limonene is a common terpene, found both in cannabis and other plant sources. What are the effects of limonene and why did Dr. Russo include alpha-pinene in Daygold’s Calm Mind, Easy Relief and Restful Night formulas?

Based on decades of research, Dr. Russo chose specific botanical terpenes to address many common discomforts people are experiencing in their minds and bodies. Through a series of blog posts, we highlight a few of the many terpenes used in each Daygold blend including where they are found in nature and their benefits. Read all the articles in our Terpene Effects series, explaining the reason why our CBG oil tinctures are so power-packed with beneficial compounds. 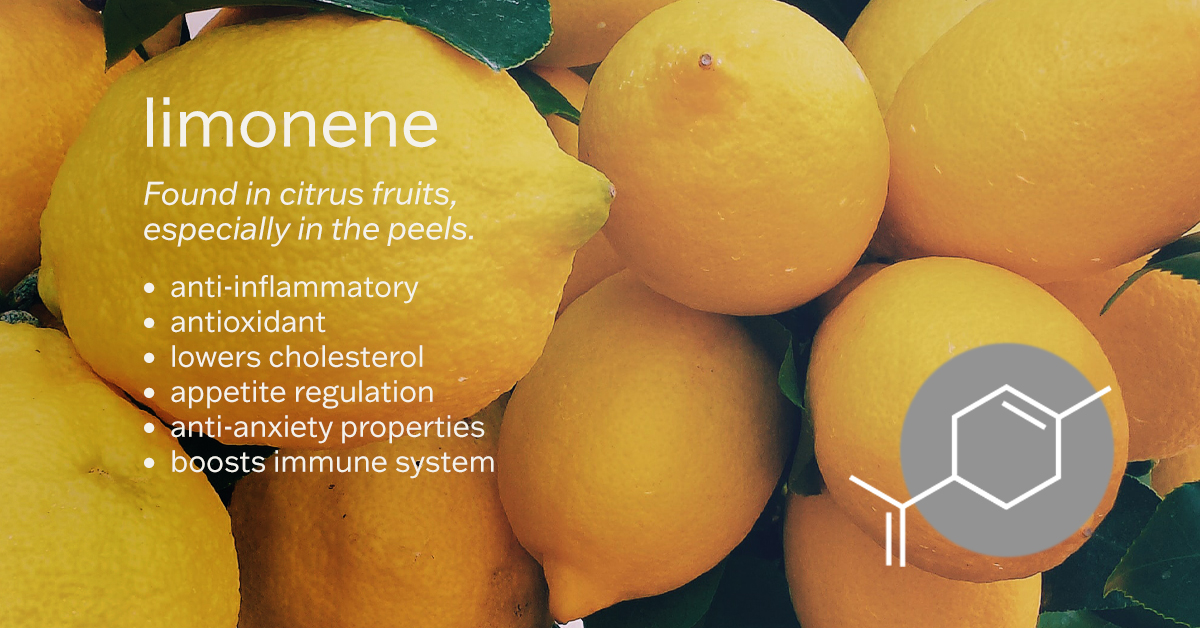 Limonene, commonly known as d-limonene for its chemical structure, is a plant compound with a bright, zingy citrus flavor and aroma. While the fruit of citrus will contain limonene compounds giving it that powerful aroma and flavor, it is found in higher concentrations in the peels of citrus fruits, specifically in orange peels. It is even found in some meats and spices. In fact, limonene is the second-most common terpene found in nature (second only to pinene).

What does limonene do?

Limonene is widely used in cosmetics, foods, beverages, soaps, and perfumes. It is a very popular ingredient in household cleaning products, prized for its lemon-like flavor and aroma. It is generally recognized to be a safe food or fragrance additive.

As with many terpenes, limonene probably evolved to serve as an insect repellent to keep pests from eating the source material. Limonene is a component in citronella, a popular insect repellent which comes in various forms.

WEIRD SCIENCE
A favorite natural gardening hack is to scatter orange peels around your vegetable and flower gardens to repel pests. Many bugs do not care for the scent of orange and will avoid it. Limonene affects insects on contact, targeting their respiratory systems.

When taken with cannabinoids, limonene mixes with CBG and other well-known compounds to modify and fine-tune the effects. Limonene acts synergistically with CBG to create a calm feeling of wellbeing, helping to ease stress.

Studies have shown that hospitalized depressed patients who were exposed to citrus fragrance in the air reported significant improvement in mood. Limonene has also been studied for other potential medical benefits; more research is needed into how these powerful compounds might impact health in profound ways.

Cannabinoids and terpenes blend in the human body to modify one another’s effects. In essence, they create an overall different or greater efficacy based on the same molecules present and the ratios in which they appear.

All three of our CBG plant blends—Calm Mind, Easy Relief, and Restful Night—feature natural, non-GMO, food-grade limonene for the ultimate in quality, taste, and purity. Each formula blends over a dozen terpenes to bring out the effects of the CBG cannabinoids present in each. (Our Restful Night formula also incorporates CBN.)

Most of the information in these articles comes from Dr Ethan Russo’s 2011 paper published in the British Journal of Pharmacology and subsequently featured in the US National Library of Medicine, National Institutes of Health. You can read the entire report, here.

† These statements have not been evaluated by the Food and Drug Administration. This product is not intended to diagnose, treat, cure or prevent any disease.